Paul Ousey and the 2014 Motorcycle Cannonball

"OZ" Trucking and Rigging“OZ” Trucking & Rigging in the News!Paul Ousey and the 2014 Motorcycle Cannonball 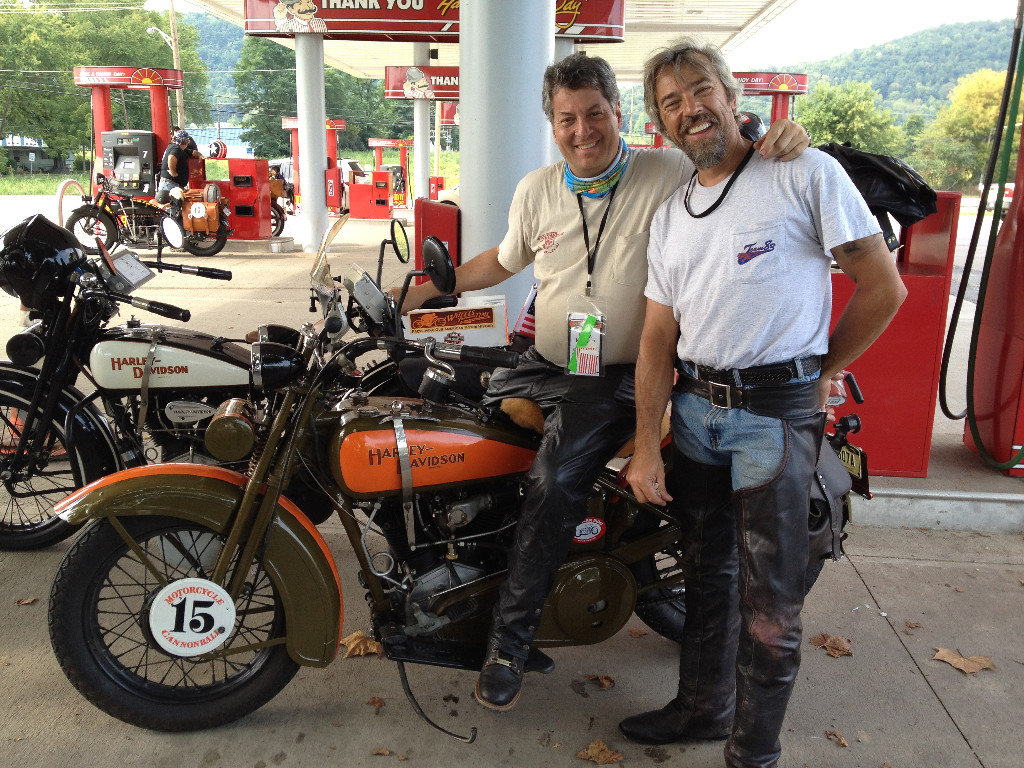 Paul Ousey and the 2014 Motorcycle Cannonball

Paul Ousey, owner of “OZ” Trucking & Rigging, is participating in the coast to coast vintage Motorcycle Cannonball again!  This will be the third time Paul has participated in this endurance competition, and this year, he is riding his 1925 Harley Davidson JE.  He is part of Team American Iron and his fellow teammates are Buzz Kanter, Pat Simmons and Cris Sommer Simmons.

The 2014 Motorcycle Cannonball is a competition of motorcycles aged 1936 and older, and is the third so far in a series that has been put together by Lonnie Isam. In past Motorcycle Cannonball events, Paul achieved 3rd overall in the Tipton 2010 Cannonball on a 1913 single cylinder belt drive Harley Davidson, and 22nd overall in 2012 on the bike he is also riding this year, the 1925 H-D JE.  Two days away from the finish he has suffered some mechanical issues requiring at least one engine rebuild.

The route is almost all back roads, starting on the beach in Daytona and ending in Tacoma, Washington, 16 days later.  The motorcycles are classed based upon displacement and age.  As of stage 12, there are 28 participants who have completed all miles, but are ranked first by class, then age of the bike – tie breaker is the age of the  rider.  The route is taking the riders through some of the most spectacular scenery in the US, varying in altitude from sea level to an amazing 12,000 ft at Loveland Pass, Colorado.  The temperatures have ranged from tropical to a bit over 30F, and both riders and machines have had to adapt and be adapted in order to continue to perform.  The miles per day on the schedule are anywhere from 140 to 311 miles, for a total of 3,938 miles.

Almost all the participants (some of which have formed teams) have a support team in chase vehicles.  The support teams have very strict guidelines, which, if not followed could lead to penalty points for the rider(s).  One of these rules is to follow a predetermined route which keeps the support teams, for the most part, on separate roadways from the riders.  The Cannonball organization has sweep vehicles and buses  to pick up bikes with mechanical issues and their riders along the way.  So many have remarked on the camaraderie among the riders who will stop to help a fellow cannonball rider should they encounter one  along the road.  The maintenance/repair work that occurs every night, tools shared, knowledge shared – whether rider, mechanic, or other support.

Paul has been riding consistently and dealt with mechanical issues with his support team as needed.  He celebrated his birthday towards the end of week two, and in his words he’s “Having a blast riding around this beautiful country”.  There have been hundreds of pictures posted on the Motorcycle Cannonball  Facebook page and dozens of Paul.  One of my favorite is the vest he wore on 9/11 in commemoration of those whose lives were lost on that terrible day.  There are too many pictures to post here, but here are a few of Paul and his team mates, in no particular order, to give you a feel for this incredible adventure Paul is on with Team American Iron.

Need to move a safe? Contact us for an estimate.

We have been installing safes since 1868. Go with a company you can trust.

No job too big or too small for “OZ”. Four generations of safe moving.

Talk to a Trucking & Rigging specialist to help you with your next moving project.